Oxford Insurance Brokers is extremely proud to be involved with a Nepalese not for profit, non-governmental organisation; The Chamely Foundation Nepal by supporting the foundations efforts in providing shelter for the poor and the assistance of rebuilding village schools outside of Kathmandu following the devastation caused by the earthquake in April 2015.

Kevin Godwin, Oxford’s Technical Director, travelled to Nepal, as a volunteer, to help rebuild Jagriti Primary School, which had been destroyed by the earthquake. The earthquake, with a magnitude of 7.8 on the Richter scale, killed near 9,000 people and destroyed many communities, still leaving countless people living under canvas or in temporary corrugated iron homes.

Oxford Insurance Brokers contributed towards the cost of materials for the construction of school in a small village outside of Kathmandu, which will ultimately provide four classrooms for young children who have not been able to attend school for the last 18 months. Kevin worked tirelessly for 10 days, alongside a Nepalese builder and two labourers on this particular project. This process was manually intensive and involved the preparing and laying of materials, and the digging of large trenches for a sufficient drainage system.

Kevin comments “Having previously travelled around Nepal, the country and its people have become very close to my heart and I and was actually 30 minutes from landing in Kathmandu when the earthquake happened. I spent a period of time in 2015 doing disaster relief work in Nepal where I met Madhav Timalsina, the Chairperson of the Chamely Foundation. The Chamely Foundation’s main focus was education for children in remoter areas of the country, since the earthquake their focus was extended to providing shelter for the poorer families whose houses were destroyed and the rebuilding of village schools. I have met many Nepalese people whose lives were drastically affected by the earthquake and their resilience to what was a very hard life in the first place with the added hardship of losing homes and loved ones is incredible. I would like to thank Oxford for the support they have given to me in allowing me to return to do more disaster relief work and their support for the Chamely Foundation”

If you would like to contribute to this cause yourself, please go to https://www.generosity.com/education-fundraising/rebuilding-schools-supplies-homes-for-helpless 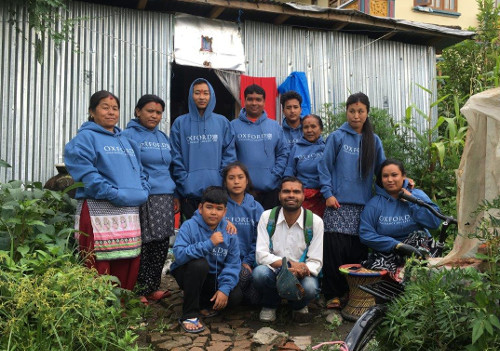